So, How did Lairds come to install a Golf Simulator in Troon? Read on to find out all about it!

Troon is famous for golf. That is to say, golf is very much a part of the identity of this little sea-side town on the west coast of Scotland. It’s fair to say as well, that Troon has a rich heritage in the sport. For example, in 2016, the Royal Troon Golf Course saw the return of the Open Championship; a tournament that saw the world’s best golfers compete, in the sport’s most prestigious competition. A reported £20 million pounds was injected into the region from tourists and businesses over the period of this single event. If golf is a Scottish sport, then Troon is one of its cradles.

However, Troon is also known for rain, harsh sea winds, short days in the winter, and cloudy skies for a significant portion of the year. One or two hardy gentlemen will trundle to the golf course, rain or shine. But for most, it’s just not possible to golf all year round.

Our client is a typical golf-enthusiast, residing to Troon.  He’s dissatisfied that he lives a mere walking distance from a golf course, but can’t golf for almost a third of the year. So, the team at Lairds have provided him with the perfect solution!

This project was spearheaded by our technicians, Jack and Calum. This was a great opportunity for the pair to prove themselves in a role of responsibility.  Although Chief Mark was always around to help, this was the first time Jack and Calum where given plenty of room to plan and ultimately decide on the tech and materials needed to complete the task.

Therefore, they got to work, enlisting help from IT specialist, Taylor, and started to work out the details. First, Jack and Calum worked out that they would need a large frame to hold the screen of a simulator. To do this, Jack contacted Golf Swing Systems. After discussing the measurements of the space, the appropriate size for the golf sim was determined and the frame was ordered.

Next, the artificial grass carpeting and teeing-off pad was researched and sourced. After testing dozens of testers against one another – and leaving the office littered with patches of grass – Calum and Jack found a perfect texture to match the Green on a golf course.  Finally, the teeing-off pad was found via FORB Golf. This pad is a perfect, even surface, made from artificial grass and with helpful built-in golf tees. 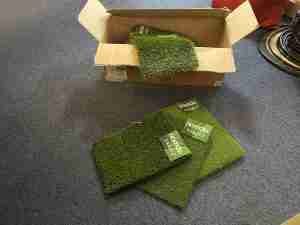 The Golf Simulator runs on a program called SkyTrak.  A top-notch piece of kit that offers laser precision and accuracy. Thus, the gap between virtual and physical golf is bridged. Lairds selected the following technology to get the best out of the SkyTrak program.

First, Taylor, the IT specialist, sourced a gaming console for the SkyTrak to run on while the Golf Simulator is in use. Now, the SkyTrak can be run fully on an iPad if the client so wished. However, Taylor sourced a PC with many advantages. A custom gaming PC, this comes equipped with NVIDIA GeForce RTX 3060 and Intel Core i5 10400F. This PC will run at peak performance, and the important feature is its robustness and upgradability. The client can use this PC for years, without needing to replace parts to ensure peak performance. This PC also comes with a top-notch graphics card and 4K capability, so the simulation will be as close to physical as possible.

Next, Calum sourced the projector for the job. He compared short throw projectors against traditional projectors and ultimately selected the Epson EB 2250U Projector. This is a projector we’ve used before on other projects, so we knew it would perform. Furthermore, Calum made sure that this projector was able to handle the job and be cost-effective for our client. It checks both of those boxes. In addition, the projector has a 16 x 10 throw ratio meaning that it would fit the screen for the golf simulator appropriately.

Once all the pieces arrived at our office, Jack & Calum used an open event space to assemble the Golf Sim and test each component. This gave Jack and Calum the chance to see exactly what they are dealing with.

The boys raised the frame up, set up the screen, laid down the teeing-off pad and set up the projector. As other businesses from the complex wandered through the area, they all wanted to know what Lairds were up to. And more to the point, they wanted to know if they could have a shot! Maybe if all goes well, we’ll install a Lairds Golf Sim and let everyone in the building use it to relieve stress.

Finally, the boys finished and got a look at the Golf Sim for the first time.

It was a full day of manual labour for Calum and Jack. Mark – not wanting morale to dip – came down and generously offered to be the one to test it out and make sure it worked, while the boys took a breather. And that is leadership. However, the marketing team got some cool footage!

Although, it may seem like Mark’s just having fun, it’s important to test a project like this for a handful of reasons. First, to calibrate everything. The program runs with a precise and intricate tracking process that gives a very accurate reading. It can also mean though that if things are off by just a tiny bit, then the results are effected greatly. Therefore, it’s important to calibrate the sim so that our client gets the maximum use from his program.

And most importantly, this is a good chance for Jack and Calum to make sure all the components operate as advertised. So with everything checked and prepped it’s finally time to take the Golf Simulator to site!

Moving all the pieces together to the site…. sucked. Especially the grass carpeting which likely weighed half a ton while rolled up. Moreover, transporting poles at 4.5 meters long is no picnic either! In fact, we would not have been able to transport them without a little help from Armour Home Improvements, a friend of Lairds. They donated a van for the day to help us get everything over to the site.

While Lairds install tech into the home, Armour Home Improvements install everything else. From Windows, doors and more, check out their website here. 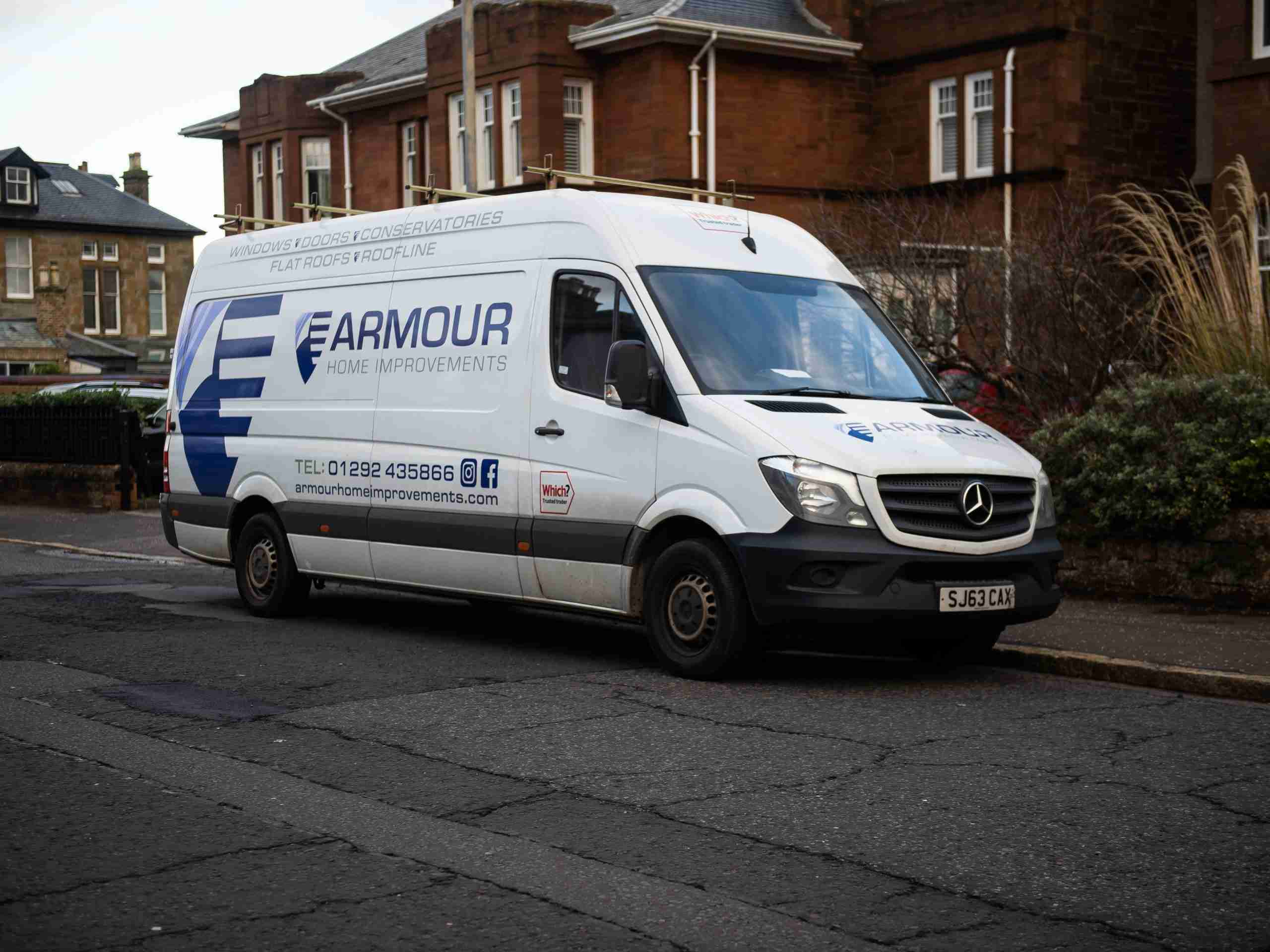 A saga within itself, we began to unpack the vans, starting with the dreaded grass carpeting. With a bit of ingenuity, We inserted a pole through the roll and “corn-on-the-cobbed it” (yes, you heard right… corn-on-the-cobbed it) and managed to lift it into the house. Tom from Marketing was even asked to stop taking notes and lend a hand. And he did…. sort of.

Don’t be fooled. These are not smiles but the grimaces of warriors!

Next we brought in the poles. The team had to navigate them through tight lanes and sharp corners to get them to the annex, where the simulator would sit.

It was actually good practice for the Lairds Pole Jumping Team!

Now everything is on site. Jack and Calum get right to work erecting the Golf Simulator in the annex space. Jack and Calum took just a couple of hours to place the grass carpet and build the frame.

Once the frame and grass was installed, the team next installs the projector and the computer and connects them to the SkyTrak. However, the boys ran into a snag when they realised that their measurements for the distance of the projector was a little short. They had intended to have the projector hang from the ceiling. Unfortunately, the projector would need to hang roughly where the back wall stood. Therefore, we brought in Davy, a fantastic joiner and frequent collaborator to help solve this problem. He suggested that instead of hanging the projector, a platform can be built into the back wall for the projector to sit on.

With the Projector successfully mounted, the next step is connecting it to the computer. As this is a space where our client will be swinging a golf club, the computer is tucked away in a cabinet out of harms way.

The SkyTrak console itself comes with a protective steel plate covering (In case of wild swings or severe frustration). But it was best not to risk it with the PC and so the boys placed it away in the cabinet.

However, to ensure that the computer could be turned on and off remotely, and with ease, the team installed the Wyrestorm UltraHD 4K HDBaseT Extender. This extender allows for 4K and ultra HD extensions to HDMI inputs over 15 meters from connected devices. This means that the client could have easy use and a clear space without sacrificing the quality of the PC or Golf Simulator Program.

After some careful calibration, all that was left to do was to get the Golf Simulator up and running. Therefore we fired up the SkyTrak, projector and PC and invited our client to play a couple of rounds!

With the black frame surrounding the screen, it is very easy to become absorbed in the simulation (which means the Golf Simulator is doing its job!)  And with the precision laser tracking of the SkyTrak, our client can achieve an accurate reading of his golf game, without the adverse weather! In addition, this Golf Sim Program gives our client the option to download a few golf courses from over the world onto the program to play.

This was a great project, especially for Jack and Calum, as they proved themselves capable technicians. Most importantly, our client’s wish list was fulfilled. He can play golf all year round if he so wishes! He also expressed to us that the Golf Simulator is great fun when his friends come over for a few beers. Therefore, the Golf Simulator provides more than one use and can be a great alternative to charades or Netflix!

Lairds can offer packages on golf simulators and driving simulators that can be built to the size of your choosing. If you think it’s time to work on your golf year round, get in contact with us today!

TIME FOR A SMART PROJECT?

Give Lairds a call today and we can discuss your requirements.

We make sure you have the system that is right for you, your aspirations, and the way you live your life.