This project began when our client got in touch with us to request that we come and have a look at an area of his home that he felt was being under-utilised. In his small kitchen/diner space, our client wanted to install a state-of-the-art VR Gaming and entertainment zone. As a company that deals in Audio Visual and Home Automation, we felt confident in our ability to install the tech for our client. What excited us was that the area was small and square and gave us a blank canvas to work with. We wanted to flex our design abilities and give our client a space that was multi-functional and intuitive, but also a space that looked cutting-edge.

An opportunity to think outside the box

We encountered early on, an issue with building the Television into the wall as the wall was external and made from hard brick. To build it into a wall like that would be tricky and potentially costly. However, if we could build it into the wall then we would be able to provide a flush finish that would help create the modern design we wanted to achieve.

So, we enlisted the help of our talented Joiner, affectionately known as Davy. Davy is a seasoned veteran of his craft and his solution to this problem was to erect a false wall that the television could be built into.

The false wall, which was initially a solution to a problem, grew into a feature of the room that had lots of potential and increased our scope of design. Not only could a television be built into it, allowing for the desired flush finish, but the false wall also provides storage and shelves below the television and provides room for tucking behind the wiring of the multiple devices. 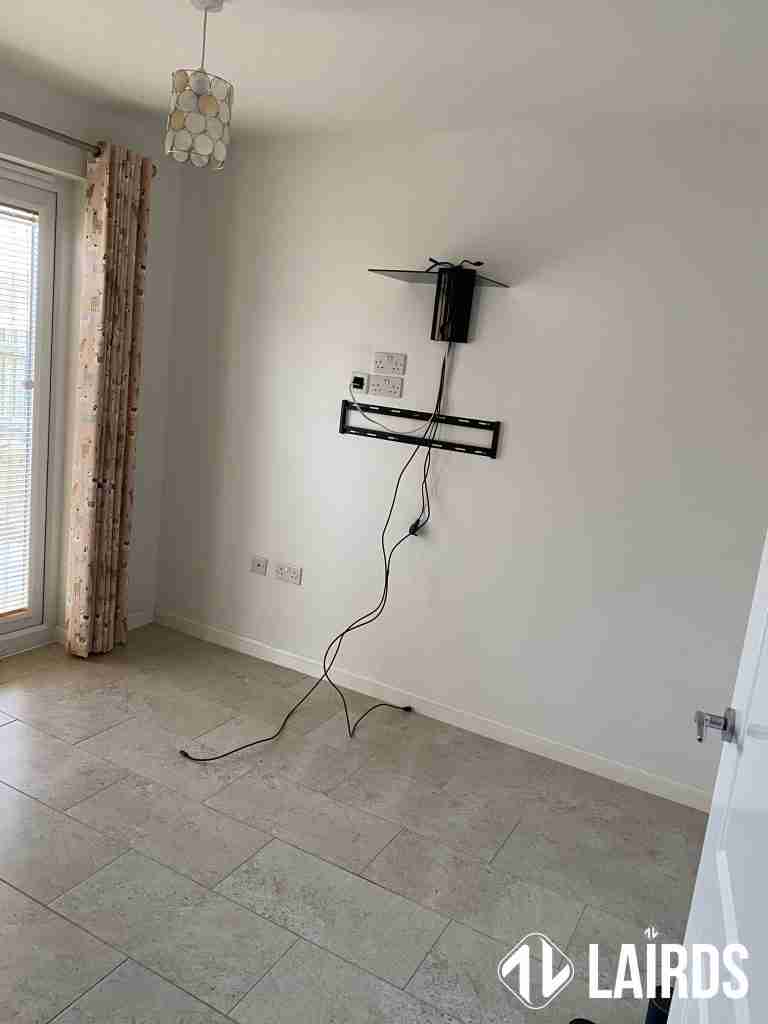 After the installation of the television, we worked with a range of products from HideIt Mount Inc. We used mounts specifically designed for each console, namely our client’s Xbox, PlayStation, and Nintendo Switch, to mount the client’s various consoles and controllers onto the wall. Our false wall stood like a column and didn’t reach either end of the room. The room either side of the false wall is where the consoles were mounted, onto the original wall, and their wiring led in behind the false wall. This meant that almost no wiring was visible, and the mounts themselves are discreet and use minimal material, giving the display an organised and clean look. The only mount that wasn’t provided by HideIt Mounts, were the mounts for the VR controllers. This was a blessing disguise because it meant that the team at Lairds got to custom make them with a 3-D printer! 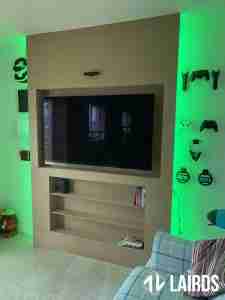 The real centrepiece of the VR Gaming and Entertainment Space is the VR console itself. VR is the most immersive entertainment available and it’s still a technology that captures our imagination as a tool of the future. We wanted to ensure that our client was able to experience this to the maximum effect, and an important thing to consider was making the space safe for VR use. Our Client’s VR set wasn’t wireless, however, and this was an issue for us. In fact, at the the time, no VR on the market was wireless yet. As we had set out to make the wiring as hidden and discreet as possible, this issue gave us something to think about.

Our solution was to install a metal arm to the top right corner of the false wall on a hinge which could swing out and hold the wires of the VR set up in the air. This feature meant that the area was secure for our client to have as much fun as he wanted without any trip hazards. And the arm folds back and the wires retract neatly in behind the false wall and out of sight when the VR set is put away. As far as the appearance of the space was concerned, our elegant metal arm extends and retracts and can be folded in neatly. Its thin, retractable design is discreet and keeps in line with our sleek and modern display.

Overall, the appearance of the VR Gaming and entertainment space is sleek, futuristic, and cutting edge – the perfect place for an enthusiastic gamer. The false wall has a muted blue painted finish and one final touch was the LED RGB Light strips running down either side of the false wall. These lights not only give off the desired futuristic vibe that gamers prefer, but the lights installed are energy saving and environmentally friendly.

The display was looking 100%. The last thing we made sure of, was that our client had a multi-functional and intuitive space that allowed for ease of control. We installed a SkyQ Box behind the false wall that lets our client switch from gaming to entertainment depending on his plans and his company, and each device is connected and can be controlled via Amazon Alexa, meaning our client can use voice control to use any of his systems, and even adjust the volume or even the brightness and colour of the LED RGB Strips on the false wall.

The team At Lairds had a great time putting together this VR Gaming & Entertainment Space for our client and enjoyed the opportunity to problem solve and get creative with the design.

TIME FOR A SMART PROJECT?

Give Lairds a call today and we can discuss your requirements.

We make sure you have the system that is right for you, your aspirations, and the way you live your life.